Chelsey Rene Wright says her father, Richard Wright, has been arrested and detained in a Charlottetown hospital by the RCMP for giving money to people on the street in Halifax and Dartmouth. 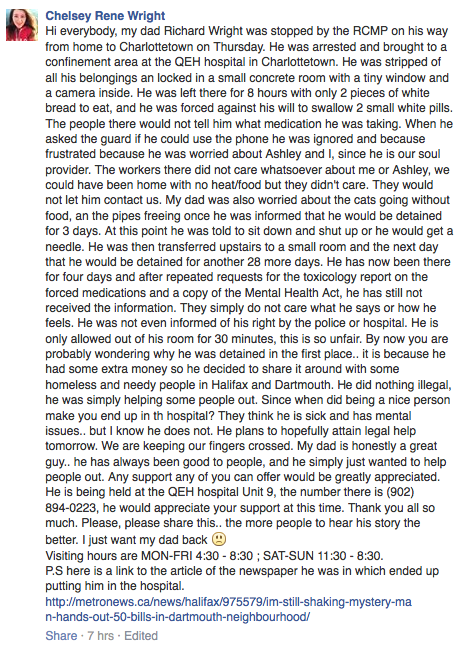 The local news in Halifax has been reporting on a stranger giving money to numerous people in the Dartmouth area. Chelsey says this man is her dad and he “was simply helping some people out”. Metro News reports “Since the story was published online, multiple people across HRM say they saw the same man on Monday and Tuesday handing out money.”

Ms. Wright says that he was detained only “because he had some extra money so he decided to share it around with some homeless and needy people in Halifax and Dartmouth”.

The validity of these claims have yet to be verified, but so far we have no specific reason not to believe Ms. Wright. This story may be updated if more information becomes available.

Metro News reports: “Pierre Bourdages, spokesman for Halifax Regional Police, said Monday he couldn’t comment if they had been contacted by police in P.E.I. about a man in HRM handing out free money.

He did say police received a report of suspicious activity in the Elmwood Street area of Dartmouth on the afternoon of March 18th, but he couldn’t say if the man was Wright.

He said when police pulled over the vehicle, officers called the mental health crisis team for assistance, but after speaking with the man, they determined there was no cause for further action.

“I can tell you this individual didn’t break any laws,” Bourdages said.”

RCMP Arrest & Detain Man For Giving Money To Needy by AlternativeFreePress.com is licensed under a Creative Commons Attribution-ShareAlike 4.0 International License.

Sources for this story: