The arms race of devaluation is not free and has come at the cost of massive global debt expansion. There is no precedent in financial history for a robust economic recovery absent either debt reduction or rampant inflation. We never deleveraged, in fact we just doubled down. According to a recent McKinsey study the world has reached $200 trillion of debt in 2014 (286% of global GDP), which is a staggering 40% increase from 2007 levels (+$57 trillion). In China, debt has grown four times faster than GDP since 2007, and half of that debt is linked to their property market. The world has simply shifted private debt to the public balance sheet. 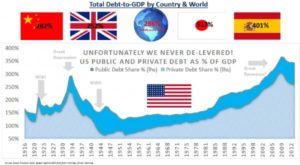 The private risk transfer to the public balance sheet can also be seen in the evolution of credit default swap pricing since 2007. Notice the sharp divergence between global sovereign CDS (red) and financial corporate CDS (blue) starting in 2013. The next major global crash will likely be driven by unhealthy sovereign credit rather than corporate credit. The next Lehman moment will be the financial collapse of a major developed country instead of a bank. 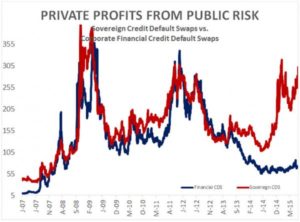 There are those who point to aggressive central banking of the late-1930s as the model for de-leveraging post-depression but this argument is highly flawed.

We didn’t financially engineer our way out of the Great Depression – we won a World War.

It’s extremely helpful in the de-leveraging process if you are the only capitalist industrial power left in the world untouched by utter and complete destruction. De-leveraging from the Great Depression had as much to do with the blood, sweat, and tears of American soldiers, the development of nuclear weapons, and the fact we were an ocean removed from the battlefield on both sides, as anything related to fiscal and monetary policy from the era.

I don’t think some investors are being radically honest when they omit this brutal truth in their analysis of late-1930s as model to argue for more quantitative easing. More quantitative easing is a great thing if you run a large risk parity fund but it will not help the American middle class.