The United States has already seen more than one outbreak of the mumps in 2014, but you can’t blame people who choose not to vaccinate. Outbreaks in both New York and Ohio have occurred on campuses which include a strict vaccine mandate.

At Fordham University in New York City all students are required to be vaccinated including the vaccination for mumps, measles, and rubella (MMR), but as of February 21st, 13 cases of the mumps had been reported with 100% of those infected having already been vaccinated.

In Ohio, as of March 24th there were 63 reported cases & 97% of those infected had been vaccinated.

Officials acknowledged that the vaccine is only 80-90% effective.

Dr Tetyana Obukhanych is an Immunologist who earned her PhD in Immunology at the Rockefeller University in New York and did postdoctoral training at Harvard Medical School, Boston, MA. and Stanford University in California. In an interview with Catherine Frompovich, Dr Obukhanych explains why these outbreaks are occurring among the vaccinated population:

“I think this is happening because vaccination does not engage the genuine mechanism of immunity. Vaccination typically engages the immune response—that is, everything that immunologists would theoretically “want” to see being engaged in the immune system. But apparently this is not enough to confer robust protection that matches natural immunity. Our knowledge of the immune system is far from being complete.”

Dr Obukhanych describes natural immunity as: “in a way, a tautological expression because immunity can only be acquired naturally at this point, only through the exposure to an infected individual, although occasionally such exposure would go asymptomatic while still establishing immunity. Nevertheless, because there is a common misconception that vaccines also confer immunity, it is sometimes necessary to use a qualifier “natural,” when referring to immunity, to distinguish it from vaccine-based protection.”

In the following video Dr Obukhanych explains how protective serum titers drop very quickly after the second MMR dose, meaning some vaccinated people do not receive any lasting protection from the MMR vaccine.

Here is a screenshot of the chart in the video highlighting the data which shows the MMR booster is not very effective & provides at best, leaky immunity. 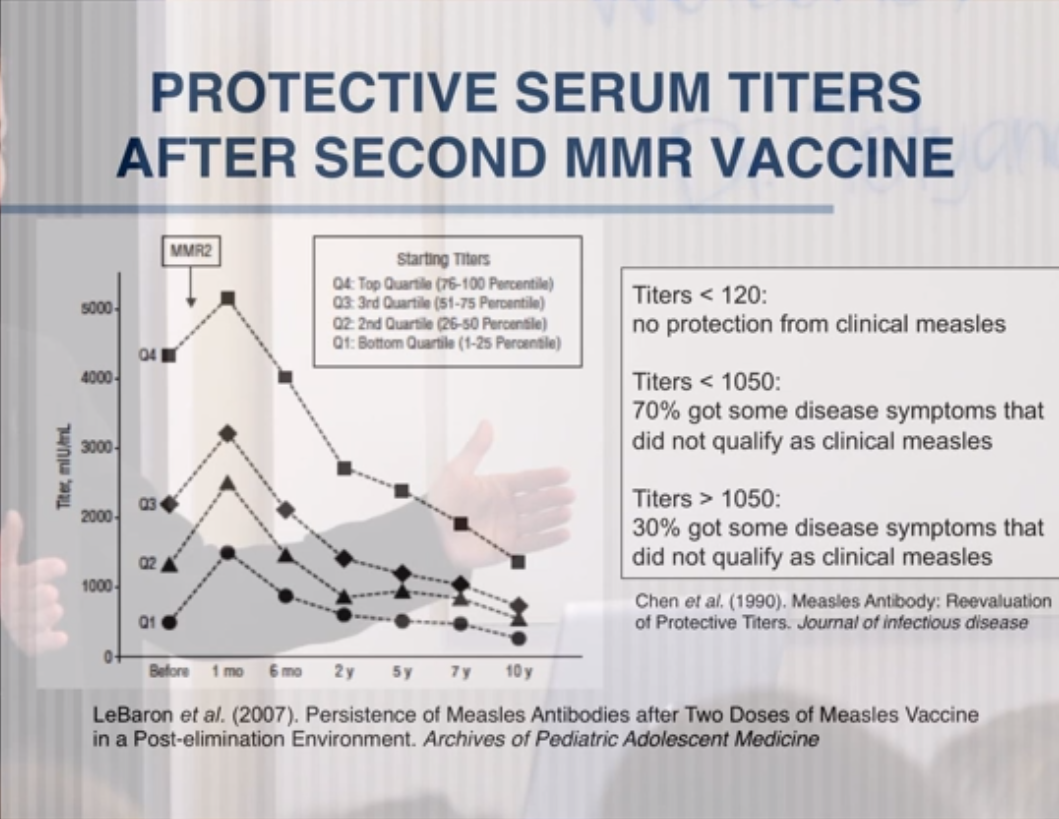 The CDC says mumps typically begins with a fever, headache, muscle aches, fatigue and loss of appetite, followed by swelling salivary glands. People unfortunate enough to catch the mumps usually recover after a week or two, but occasionally the disease can cause serious complications.

Dr. Russell Blaylock, a board-certified neurosurgeon, author and lecturer who attended the LSU School of Medicine and completed his internship and neurosurgical residency at the Medical University of South Carolina explains how herd immunity is only truly obtainable through natural immunity:

“In the original description of herd immunity, the protection to the population at large occurred only if people contracted the infections naturally. The reason for this is that naturally-acquired immunity lasts for a lifetime. The vaccine proponents quickly latched onto this concept and applied it to vaccine-induced immunity. But, there was one major problem – vaccine-induced immunity lasted for only a relatively short period, from 2 to 10 years at most, and then this applies only to humoral immunity. This is why they began, silently, to suggest boosters for most vaccines, even the common childhood infections such as chickenpox, measles, mumps, and rubella.

Then they discovered an even greater problem, the boosters were lasting for only 2 years or less. This is why we are now seeing mandates that youth entering colleges have multiple vaccines, even those which they insisted gave lifelong immunity, such as the MMR. The same is being suggested for full-grown adults. Ironically, no one in the media or medical field is asking what is going on. They just accept that it must be done.”

Alternative Free Press has reported previously that 40% of the recent measles outbreak in California were also full vaccinated. 10 people were identified as likely sources of the measles outbreak having traveled to high risk areas, but it was not disclosed if any of the 10 were vaccinated or not. At the time we speculated “It’s likely safe to assume that if the majority of the ten people who visited an outbreak area were not vaccinated, we would be hearing about it. I’d guess that most people who are not vaccinated would avoid travel to an area with a large outbreak & it seems reasonable to assume that many of the ten people identified were vaccinated.” While we can only speculate about the measles, these recent mumps outbreaks are infecting vaccinated populations and were definitely not caused by people choosing to skip vaccinations.

Sources for this article: