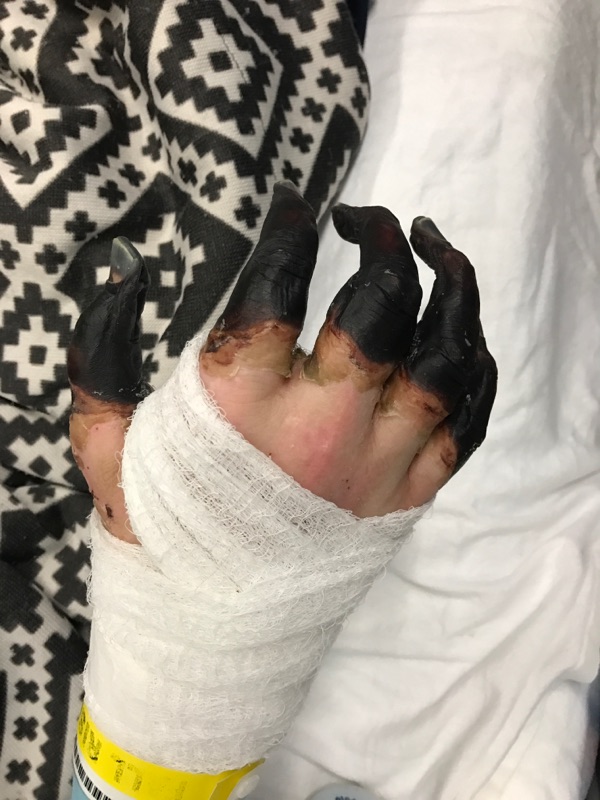 An extremely rare case of strep throat that almost killed an Alto man has instead taken his hands and feet.

Kevin Breen, 44, was healthy and active when he started feeling sick on Christmas Day.

“It didn’t seem that unusual,” he said.

Days later, the unbearable stomach pain sent him to the emergency room.

“I never thought (I’d be) going in for a stomachache and coming out a totally different person and (it’s) life-changing,” said Breen.

“He was one of the sickest patients I have ever taken care of,” said Dr. Elizabeth Steensma, an acute care surgeon at Spectrum Health Butterworth Hospital.

Although Breen’s son had had strep and fought it off, Steensma didn’t think this was the same type of infection. Breen’s stomach was growing and hardening. A CT scan showed his stomach was filled with pus.

Doctors thought maybe an organ was punctured, but they couldn’t find anything.

“It was almost a mystery,” said Steensma.

While doctors tried to pinpoint the source of the problem, Breen’s organs began failing. In an effort to save those organs, his body redirected blood flow to them — leaving the flesh of his hands and feet to die.

At one point, his wife was told to gather family and prepare for the worst.

“That moment was terrifying,” she said. “I just kind of lost it and stopped and prayed.”

Then there was a clue: a rash on his upper torso.

Knowing that Breen’s son had strep throat, doctors ran a test and found a common sign of strep in his belly.

The strep had traveled from his throat to his stomach, and his body couldn’t fight it. Breen had a strong strain of strep that he was very susceptible to. It was the perfect storm.

Breen’s case is being studied by doctors at Spectrum Health. Dr. Steensma found 32 cases of patients with strep traveling to the abdomen, most involving women and their urinary tracts. Breen is one of two men in the world who had strep travel from his throat to stomach, according to Steensma.

He returned home, but the infection had taken its toll. His hands and feet turned black and lost almost all movement — so doctors said they both hands and feet would have to be removed.

Breen was the breadwinner for his family. He now relies on his wife and her teaching salary for pretty much everything.

Throughout this whole ordeal, Breen has continued to smile. He’s not bitter, but happy to be alive and thankful for the doctors who saved him.

(read the full article at WOOD)

Donations for Kevin Breen can be made here