Editor’s Note: This article is from 2013, using data from 2011. Since then the problem has gotten worse as more and more radiation has been released. Last month (April 2014) the Fukushima No 1 manager admitted they do not have control of the situation. Radioisotopes have continued to be released for the past 3 years with more to come.

The release of radioisotopes from the Fukushima Dai-ichi nuclear power plant in March 2011 amounts to the largest-ever accidental release of radiation to the ocean. It came mostly in the form of iodine-131, cesium-134 and cesium-137, the primary radioisotopes released from the reactors, reported Ken Buesseler, a marine chemist at Woods Hole Oceanographic Institution.

All of these substances can cause long-term health problems, said Buesseler, but iodine-131 has a half-life of just eight days and so would be effectively gone from the environment in a matter of weeks. It was cesium-134 and cesium-137, with their half-lives of two and 30 years, respectively, which would remain in the ocean for years and decades to come. 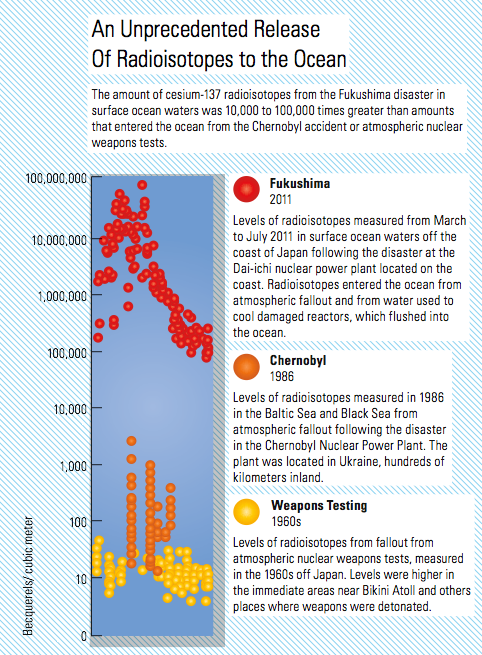 In fact, most of the cesium present in today’s oceans, Buesseler noted, is a remnant of atmospheric nuclear weapons testing conducted by the United States, France, and Great Britain during the 1950s and ’60s. Lesser amounts are attributable to the Chernobyl nuclear accident in 1986 and to local sources, such as the dumping of low-level waste from England’s Sellafield nuclear facility into the Irish Sea.

Prior to Fukushima, however, the levels of cesium-137 off the coast of Japan, as cataloged by Michio Aoyama at the Meteorological Research Institute in Japan and others, were among the world’s lowest, at around 2 becquerels per cubic meter (1 becquerel, or Bq, equals one radioactive decay event per second). Against this background, the concentrations measured in early April of 2011 were all the more alarming. At the source waters closest to the Fukushima Dai-ichi plant operated by the Tokyo Electric Power Co., concentrations of up to 60 million becquerels per cubic meter were reported, high enough to cause reproductive and health effects in marine animals.

Most of the cesium from Fukushima came from the millions of gallons of water poured onto the reactors during efforts to cool them, which subsequently flowed into the ocean as runoff or via groundwater. One major leak from flooded buildings at the plant also added cesium to the ocean. Once the leak was plugged in early April, cesium levels close to shore fell off dramatically, Buesseler said. They did not, however, fall out of sight.

“Dilution due to ocean mixing should be enough to cause a decrease in concentration down to background levels within a short period of time,” Buesseler told his audience at the Fukushima and the Ocean conference in November 2012. “Yet all the data we have show that measurements around the site remain elevated to this day at up to 1,000 becquerels per cubic meter.”

He hastened to put that number into context. “A thousand becquerels is not a big number for cesium. Just for comparison, that’s lower than the U.S. Environmental Protection Agency’s limit for drinking water. At that level, Buesseler stressed, the cesium in Japanese coastal waters is safe for marine
life and for human exposure.

“It’s not direct exposure we have to worry about, but possible incorporation into the food chain,” he said. That, and the ongoing high levels of radioactive cesium. “The fact that they have leveled off and remained higher than they were before the accident tells us there is a
small but continuous source from the reactor site.”

The routes and rates of radiation

Away from the coast in the open ocean, the radioactivity that showed up first came from fallout from the atmosphere carried out to sea by winds. The winds limited radioactive exposure on land, as more than 80 percent of the fallout fell on the sea.

Only a few weeks after the accident, a research cruise undertaken by Makio Honda and colleagues at the Japan Agency for Marine-Earth Science and Technology, or JAMS-TEC, detected low levels of both cesium-137 and cesium-134 some 1,900 kilometers (1,180 miles) from Fukushima, from radioactive gases carried out to sea by winds. The importance of the shorter-lived cesium-134 isotope, Buesseler said, was that it offered definitive proof that the contamination had originated from Fukushima. Cesium-134 is not naturally present in the ocean, and it has a half-life of only two years. Any amount of it introduced by weapons testing or other pre-Fukushima sources would have long since disappeared.

In June 2011, Buesseler led a quickly organized expedition aboard the research vessel Ka’imikai-o-Kanaloa that took a comprehensive look at the fate of Fukushima radiation both in the open ocean and in marine life. Beginning 600 kilometers offshore and coming within 30 kilometers of the crippled
nuclear plant, the research team sailed a sawtooth pattern, gathering water samples from as deep as 1,000 meters, and collecting samples of phytoplankton, zooplankton, and small fish. They also released two dozen drifters to track currents. These instruments move with ocean currents over months and report their positions via satellite.

Like their Japanese colleagues, Buesseler’s team measured elevated levels of both cesium-137 and the telltale cesium-134 in the water they collected. These levels varied widely across the sampling area, however, which indicated the complexity of the currents at play—dominated by the mostly eastward flow of the mighty Kuroshio Current, the Pacific Ocean’s equivalent of the Gulf Stream in the Atlantic.

“The first thing we noticed was that when we got to the Kuroshio, we lost the cesium-134 signal,” Buesseler said. “That confirmed that the Fukushima radioactive fallout from the atmosphere did not reach these more southern latitudes.” The scientists believe the Kuroshio acted as a barrier, blocking radioisotope-contaminated waters from flowing through it and to the south.

As expected, he said, the highest levels of radioactivity were measured closer to the shore. Surprisingly, these high levels were found not at Fukushima but much farther south, off the coast of neighboring Ibaraki Prefecture. The drifter data showed that this seeming anomaly was the result of a large circular flow, or eddy, that had trapped contamination close to shore south of the plant.

Over time, the researchers’ drifters helped to establish the routes and rate of radiation transported out into the wider ocean and revealed the complexity of currents in the region. A year after the drifters were released, WHOI oceanographer Steve Jayne showed that their circuitous tracks extended halfway across the Pacific, remaining mostly north of the Kuroshio Current. Combined with surface-water samples taken by commercial “ships of opportunity” in a program organized by Aoyama, these data show cesium mixing down into the ocean and flowing east at a rate of about 7 kilometers per day. At that rate, Buesseler said at the November 2012 conference, it would take another year for small but measurable amounts of cesium to show up off the U.S. West Coast.

(read the full article at whoi.edu)